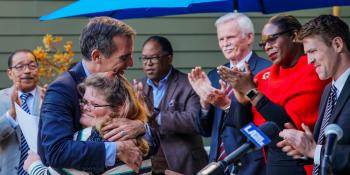 Los Angeles Mayor Eric Garcetti has made housing his top priority, pushing initiatives to shelter the homeless and invest in the construction of new affordable housing.

Garcetti is building on his experience as a longtime Habitat supporter and volunteer — though he notes that it was his wife, Amy Elaine Wakeland, who traveled with Habitat to work alongside President and Mrs. Carter in the Philippines in 1999. Garcetti’s administration now works directly with Habitat for Humanity of Greater Los Angeles on projects tackling the affordable housing crisis in L.A.

On the occasion of the 50th anniversary of the Fair Housing Act, Habitat for Humanity International CEO Jonathan Reckford spoke to Garcetti about his vision for affordable housing in the second largest city in the nation.

Jonathan Reckford: Fifty years after the Fair Housing Act, what is the state of fair and affordable housing in Los Angeles?

Eric Garcetti: In the last half-century, housing has gone from being an aspiration to a right in this country. But when so many people want to be here that there’s not enough housing, and prices and rent are out of control, it takes a multi-pronged approach to begin leveling the playing field.

On one end, we have a homelessness crisis that has escalated into a humanitarian emergency — so last year we passed the two largest measures in American history to both build housing for individuals who are homeless and provide services to help them stay in that housing.

But we also know we have to address the general crisis of affordability, or else more people will become homeless. We set a goal to build 100,000 housing units over an eight-year period and to double the production and preservation of affordable housing.

In just the first four and a half years we’ve already permitted 72,000 units, which means we’re going to surpass that 100k unit goal. And we’ve passed new revenue sources and land use initiatives that are finally starting to double the production of housing that’s affordable to low-income Angelenos. These are just a few examples of how we’re looking at this issue from top to bottom.

JR: Are you seeing pushback from the community in terms of allowing greater housing density?

EG: That is really changing in Los Angeles. In the past, it’s been more of a NIMBY culture, and the loudest voices in any community meeting were people opposing density or affordability. We recently held hearings about the zoning updates around our new light rail line that goes all the way from downtown to the ocean in Santa Monica, and while those usual suspects did turn up, there were also younger, louder renters saying, “Housing is too expensive. Why isn’t the city being more aggressive?”

In my entire political career, I’ve never seen such a counterbalance, and I think it shows that the sands are shifting. People really do get that you have to build your way out of this crisis.

JR: One thing I was struck by was that the U.S. Conference of Mayors recently came out and said that affordable housing is at the top of the priority list.

EG: That’s because mayors are the first responders in this crisis.

In a state spanning diverse rent markets, affordability environments and geography itself, everybody said this is the number one issue. Mayors are leading the way, but we can’t do it alone. We need this to be a national conversation.

JR: We think there’s a role for affordable homeownership because ultimately that’s still a way for asset-building for lower-income families and to help stabilize low-income communities as well. Do you see homeownership as part of the mix in your efforts?

EG: Absolutely. In Los Angeles and California, I want that to be a big part of the conversation. This is a moment for real gut checks for American cities — do hyper-successful cities want to focus on high-end homeowners or maintain economic diversity and a middle class?

JR: A core part of the Fair Housing Act was that there was housing discrimination that forced a lot of families into segregated or disadvantaged housing. How do you develop in an inclusive way that allows the families that already live in those communities to benefit from that development?

EG: One of our largest public housing projects, Jordan Downs, is a perfect example of how we are building opportunity in lower-income neighborhoods.

We are adding density so that families can continue to grow. We are making sure that as we develop the housing, people never have to leave their neighborhood and that they have an opportunity to gain job training and placements in the construction work happening over the next decade.

And we’re tying in amenities across Watts, not just in the redevelopment area, like solar power, electric buses and community gardens — things that will create an amazing urban community, help address climate change and give people an opportunity to lead healthier lives.

JR: What are the barriers to fair housing that remain today from your perspective?

EG: I’ve always said that housing is the foundation of this nation’s middle class and of our prosperity. So to me the biggest barrier to that dream is affordability and making sure we have the supply we need with prices that allow people to live in safe, decent, and healthy homes.

I think the tide of public opinion is definitely shifting — you don’t have to live on the streets to actually feel this housing crisis. We have people embracing density, connections to transit, healthy communities, homeownership and rental together. We have grown up — literally and figuratively — to embrace that our city, our state and this nation can’t succeed if people don’t have a place to live.

JR: My last question: how can Habitat support your efforts?

EG: We love having Habitat in L.A. In a city that tends to only build high-end housing, you’re showing that there’s a model that works when we come together.

I’d just say keep letting people know that this is a shared burden across America. No matter if homes sell for $100,000 or $1 million, all American communities share the challenges of a housing shortage and a capital shortage.

We’re going to need to grow as a country, and Habitat can help house a growing nation. We can’t do it without you. 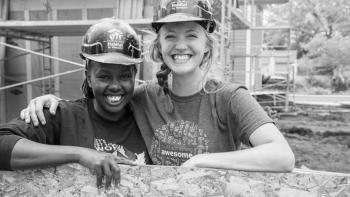 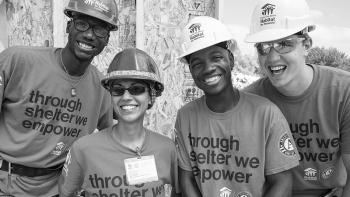 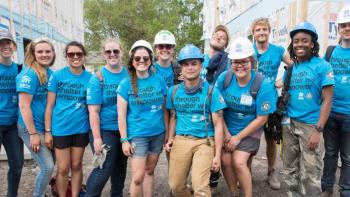