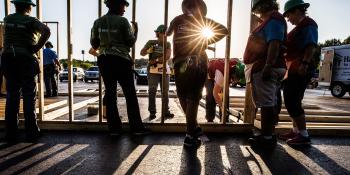 The lasting impact of Women Build

“I am afraid to think where I would be right now without Habitat,” Janet says.

Right now, she is curled up at home with Oscar, her chihuahua. Her two girls — “the best girls on the planet,” Janet brags — are grown and out on their own, successful and, more importantly, happy. The house is a big reason why they are doing so well. “It gave them a lot more confidence. It gave me a lot more confidence.”

Janet moved into her house in 1991, after she and dozens of other women raised it as part of Habitat’s first Women Build. Back then, the program to empower women through affordable shelter was a grassroots effort started by Habitat Charlotte, with Janet its first participant.

Fast forward to volunteers and future Habitat homeowners working alongside each other in communities across the U.S. each year during National Women Build Week. Since 2008, Lowe’s has partnered with Habitat in hosting this annual event, which was created out of a desire to have women join together nationally and make an impact in one week. The build week, held just before Mother’s Day, has drawn a total of 100,000 volunteers in its 10 years.

Janet vividly remembers the day that she showed up to build her house, a blue, 1,000-square-foot, three-bedroom that changed her family’s life. Among the volunteers were former first lady Rosalynn Carter and Habitat co-founder Linda Fuller.

“When I came on site and saw all these women, that blew my mind,” Janet says. “There were so many women wanting to know me that I thought they had the wrong Janet. I was just a nobody. They came up to me and said, ‘We are going to help you build a house for you and your little ones.’ They made me feel so important. It was an enormous thing for me.”

At that time, Janet and her daughters, Shameka and Tanita, then 13 and 8, were stuck in a cycle of having to move every year or every other one to cover the rent. Although Janet worked in accounting for a local company, her paycheck couldn’t keep pace with rent increases. Whenever she called a family meeting, the girls knew it was moving time again. “I didn’t know there was a pattern, but I guess there was,” Janet says.

Changing apartments often meant changing schools. Shameka handled being uprooted better than Tanita, who became shy and withdrawn. “It was really rough on them. The girls didn’t stay anywhere long enough to get used to it or make friends,” Janet says. “I felt bad, but there wasn’t too much I could do about it. It was better to keep a roof over their head than for them to have friends. You gotta have a roof.”

That first Women Build provided Janet and her daughters with so much more than a roof. Janet picked up skills from the women on the worksite and a desire to be self-reliant. “There were plumbers and framers and women doing all kinds of things, and I decided I needed to learn some of these things myself,” Janet says. “I wanted to learn how to fix a screen door, and I did. I started teaching those things to my children. With my increase in confidence, I saw a change in them.”

Moored to a home, Tanita started coming out of her shell at school. “Next thing I knew, she was bringing girls home because she had made friends,” Janet says. “This house changed all of us. And it opened up a whole new world for us.”

The girls, now women, are creating their own worlds. Both have a mind for numbers like their mother. Shameka, who has three children, works in banking. Tanita, a credit rep, is working on her master’s in accounting.

As for Janet, she is staying put.

“After the girls left, it took me a minute to get used to it but I did.” she says. “Now, it’s just me and Oscar. This is my home, and I’m not going anywhere.”

Read more: Veteran Habitat volunteer and Lowe’s vice president of public affairs Chris Ahearn shares what she has learned from her experiences — and about herself — through Women Build.