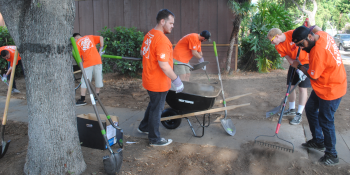 Partnering with veterans through our home repair program

It’s about dignity, Jim says, more like restoring dignity. That’s why he refers veterans to Habitat for Humanity of Orange County’s repair program.

“You will see vets who are embarrassed about where they are living,” says Jim, who works with disabled veterans. “Habitat comes in and takes them from their chin on their chest to their head held high. The first time I saw that I said, ‘I’ve got to keep sending people there.’”

Today, Jim, a disabled veteran himself, is the one with his head held high. This past summer, he partnered with Habitat Orange County to make improvements to his home in Santa Ana in Southern California. The house, which sits on a corner lot, has new flooring and siding, a fresh coat of paint and sodding that has changed the yard from brown to green. “The neighbors keep coming by, saying they can’t believe the transformation,” Jim says, “and that puts the pride in me.”

Habitat Orange County serves an area with many veterans. Jim was 20 when he was drafted into the U.S. Army and sent to Vietnam. He fought in the Mekong Delta in southern Vietnam and on the Ho Chi Minh Trail in Cambodia, earning two Bronze Stars, the Army Commendation Medal and the Cross of Gallantry with Palm, given by the former country of South Vietnam for valor and heroism. Certificates of recognition from President Richard Nixon and General William Westmoreland hang in Jim’s hallway.

“I didn’t go there to get medals,” he says, “I went there to do my job.” While there, Jim was exposed to Agent Orange. The herbicide has been linked to many health problems, some surfacing decades after exposure, which is what Jim is dealing with.

After coming home from the war, Jim spent three decades overseeing the maintenance of 10 stations of the Santa Ana Fire Department, doing everything from making sure the fire alarm system sounded to building furniture for the station houses. Now 69, he has neuropathy in his feet caused by his war days. “It has slowed me down, but it has not stopped me,” he says.

Many disabled veterans can attest to that. Jim distributes wheelchairs all around Southern California and runs a food program for those who can’t afford groceries. He also is the past commander of California’s Disabled American Veterans, a nonprofit. It was through these efforts that Jim learned about Habitat Orange County’s repair program for veterans. “If a veteran needs a ramp or a door handle, whatever, Habitat is there to help,” Jim says.

Over the years, Jim has referred many veterans to the program. Then Habitat Orange County reached out to Jim about making repairs to his house. “We want to help all of the veterans who need our help,” says Michael Speck, manager of Habitat Orange County’s home and construction repairs. “Jim has served our country, he has served our local community and he has served other veterans. When he needed a little help fixing up his house, we were more than happy to be there for him.”

At Jim’s house, there’s new insulation in the attic and a privacy fence. A laminate floor has replaced carpeting that had worn down to the padding. Volunteers from KILZ paints took brushes to the exterior of the house, making it a rich dark brown.

Several dozen people from Team Depot, The Home Depot’s associate volunteers, landscaped the yard, putting in sod and planting bushes and trees. Since 2011, The Home Depot Foundation has committed more than $16.3 million to Habitat’s Repair Corps program, which is an initiative within Habitat’s Veterans Build. To date, Repair Corps has helped more than 1,000 veterans like Jim with critical home repairs and home improvements.

“You wouldn’t believe how hot and humid it was the day that those volunteers from The Home Depot were here,” Jim says. “They were just amazing — like ants on a hill — and no one was complaining. They just kept going and going until the work was done.” They also built a vegetable garden for Jim’s 7-year-old grandson, Josh. “That really touched me when they did that,” Jim says. “Josh and I both teared up.”

Alan Losee remembers that day well, partly because of the heat, partly because of Jim. Losee is the manager of a Home Depot store in Santa Ana and captain of Team Depot volunteers from a dozen stores in the area. “Being a veteran myself, it is good to be able to give back to veterans and help out in any way,” says Losee, who served in the U.S. Marines during the Gulf War. “At the end of a project, they are just so grateful.”

Jim is definitely that. His dignity has been restored, he says — and so has that of his wife, Deanna. “She was so embarrassed, not only about how the house looked on the outside, but also how it looked on the inside. She would not have anyone over,” Jim says. “And now, everything looks just beautiful.”