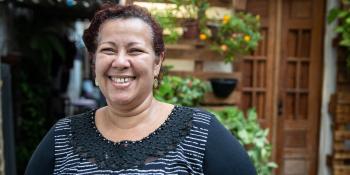 Since 1992, Habitat for Humanity Brazil has actively worked with families to build new houses and renovate houses that are in bad condition. Habitat also works to provide water access to families living in extremely poor conditions in the country’s rural areas. For the past 10 years, however, advocacy has been a key strategy in Habitat Brazil’s work.

“The housing deficit in Brazil is incredibly high, and it has actually grown in the past 10 years because the population is growing, adding to that the economic difficulties that the country has faced,” says Socorro Leite, Habitat Brazil’s national executive director. “We need strong and effective public policies to guarantee the right to social interest housing for these families, and we need to act on several different fronts.”

That is why in 2015, when Habitat launched our global advocacy campaign Solid Ground, Habitat Brazil promptly decided to participate.

“You can’t provide adequate housing for a family if they are in constant threat of being removed from their house,” Socorro says. “Land and property rights are a fundamental part of right to housing, and this is something that needs to be guaranteed by the public power.”

Carmen has lived in Ilha do Destino since she was a little girl. Ilha do Destino was created in the early 1950s in the wealthiest neighborhoods in Recife. In 1952, Carmen’s mother and father moved the family to Recife in hopes of finding opportunity. With little money to buy or rent a house, the only solution her family found was to build their own home on an abandoned piece of land.

Their research, part of an advocacy project with the Open Society Foundations, found nearly 90 communities whose residents faced eviction. Most communities, like Ilha do Destino, were in Recife in extremely valuable areas.

Historically, residents in these areas are low-income. Like Carmen’s family, they find their own solution on vacant or abandoned plots of land, generally owned by the state.

“One of the main issues we have to deal with when working with communities who do not have secure land tenure and are facing eviction is the complete lack of support from the Brazilian judiciary system,” says Ronaldo Coelho, Habitat Brazil’s legal advisor and advocacy coordinator. “Laws and legal tools that should be used in land conflicts cases are very subjective, and it’s common for a land tenure case to take over 20 years to be processed. Often they are ruled in favor of a supposed proprietor of the plot of land.”

In 2015, in partnership with the Department for International Development/UK aid and several civil society organizations, Habitat successfully advocated for a statewide public policy that recommended the creation of a department within the public defender’s office to help mediate and prevent urban land conflicts.

In 2017, the Department for Land and Housing was created, with the potential of directly serving over 4 million people. It currently works in 23 communities facing threats of eviction.

“The department was created to help communities like Carmen’s who are actively organizing themselves, but do not have the means to hire a private attorney,” says José Fernando Debli, the public defender coordinating the department and overseeing cases.

Habitat Brazil has continued to work to raise public awareness on these issues as well as to gather data on empty and abandoned buildings that could be converted into housing. All these strategies are key efforts in strengthening the rights of millions of Brazilian families like Carmen’s and working toward a country where all people understand that having a decent place to live is a human right acknowledged in Brazil’s Constitution.

Read more about how Habitat Brazil is working to strengthen the housing rights of millions of Brazilian families like Carmen’s. 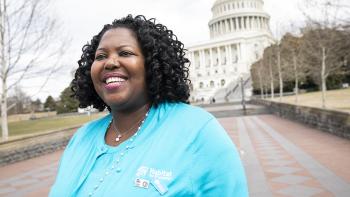 Habitat for Humanity does more than build. We also advocate to change policies and systems to improve access to adequate affordable housing. Learn how and how you can get involved.