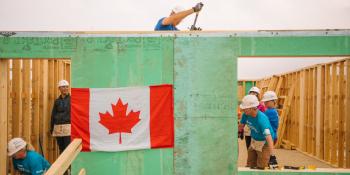 Did you know that Canada is celebrating its 150th anniversary in 2017? Habitat for Humanity’s Jimmy & Rosalynn Carter Work Project is helping to mark the milestone by building 150 homes in Edmonton, Fort Saskatchewan, Winnipeg and other cities throughout Canada.

Future homeowners are building the places where their families will grow stronger and more independent, working alongside volunteers from the local communities, as well as across Canada and the United States.

Here are a few more facts about culture, people, places and the importance of housing in Canada.