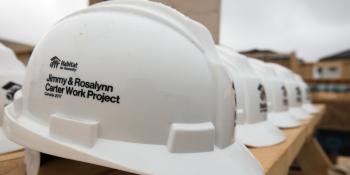 This week’s events across Canada have captured the imaginations of many, thanks to an abundance of news and feature stories highlighting Habitat’s work and our most famous volunteers.

And so many of our participants have shared their experiences on social media. Here are just a few of our favorites. Remember to follow #HabitatCWP to see even more!

Jimmy and Rosalynn Carter headed to Canada to help build Habitat houses
“It was 150 years ago — July 1, 1867 — that the Dominion of Canada was officially proclaimed. And whether you consider that a birthday or an anniversary, the timing of the Habitat project is perfect, said Justin Trudeau, Canada’s much buzzed about Prime Minister.”

Former U.S. president touts Habitat for Humanity as model for governments
“He acknowledges that the housing challenge remains a difficult one to tackle for policy makers and volunteers. ‘It’s not enough. What the local, state and federal government do and what volunteers like we do put together makes a big dent in the need, but it’s still not enough,’ he said in an interview from a work site in Edmonton.”

Why Jimmy Carter won’t give up his work boots for slippers at 92
“Homes represent more than just shelter to the former president. He believes inadequate housing has a wide range of consequences including lost pride, poor health, and lower grades for children.”

Walls of humanity
“To see the couple so active, so engaged and so encouraging cannot help but inspire. It has, absolutely: close to 1,000 volunteers are giving their time to build 75 homes in our area as part of Canada’s 150 birthday celebration. The first buzz saw sounded seconds after 8:30 a.m. Monday and continued through the week.”

Who did not laugh, cry, feel proud of #Canada & 100% feel empowered to give back during the live #HabitatCWP ceremony!? I did! pic.twitter.com/4gYqg5V8uK

Inspiring: >900 people out this morning for the Habitat for Humanity Jimmy & Rosalynn Carter Build Project in #Edmonton! #yegcc #HabitatCWP pic.twitter.com/RdCKT2S6lV