Habitat for Humanity in Sri Lanka

The housing need in Sri Lanka

Despite great advances as a result of Sri Lanka’s housing programs, the country’s need for safe and secure housing is made more pressing by poverty, civil strife and disasters such as cyclones, floods and landslides. More than a decade after the end of the civil war, many internally displaced families are still living in temporary tin sheet shacks in the North and East of the country. The government’s 2016 housing needs survey showed 800,000 families out of 6 million families in the country did not have a home of their own. Some were living in temporary or rental homes while others were homeless and landless. Impoverished plantation workers also lack adequate housing as they live in what are known as line-houses without proper water and sanitation facilities.

How Habitat addresses the need in Sri Lanka

For nearly 25 years, Habitat Sri Lanka has partnered with supporters and volunteers to build decent and affordable homes for families in need of adequate housing. Following the 2004 Indian Ocean Tsunami nearly 3,000 families were supported to rebuild their homes through the reconstruction housing project led by Habitat Sri Lanka. In May 2013, a 4,000-home housing project funded by the Indian government for internally displaced people in the Eastern Province was launched. In February 2017, a 14-million-euro (more than US$14.8 million) project funded by the European Union broke ground in the Kilinochchi, Mullaitivu and Batticaloa districts. The multi-faceted housing project will support 2,455 war-affected families in northern and eastern Sri Lanka and feature the use of locally made construction materials. In 2018, Habitat Sri Lanka constructed nearly 100 homes for rural plantation workers with funding from the Indian government, and 37 homes were constructed for flood-affected families in Kalutara.

Habitat Sri Lanka partners with families to incrementally build 51-square-meter core homes that they can expand in future when funds are available. An example of such incremental building is the 100-home “Brick by Brick” project. Based on the homeowner-driven construction approach, families contribute to the house design and choose the materials and suppliers while Habitat Sri Lanka provides technical support and construction expertise. Families are also trained in the use of eco-friendly, locally available construction materials such as compressed stabilized earth blocks and appropriate construction technologies.

Chronic kidney disease is a serious health problem, particularly in rural Sri Lanka. Habitat is committed to providing families with access to safe drinking water through the installation of water tanks, distribution of water filters and training in water purification and good hygienic practices. In 2018, Habitat partnered with Hatton National Bank to install water storage tanks, providing 50 families in Batticaloa with safe drinking water, and to build school toilets, enabling more than 150 students to have access to safe sanitation.

Habitat Sri Lanka enabled 80 landslide-hit families to rebuild their houses following May 2016’s Cyclone Roanuand distributed emergency hygiene kits to 1,000 families after 2017’s Cyclone Mora. Under the European Union-funded “Homes not Houses” project, Habitat has empowered more than 2,370 conflict-affected families to resettle and rebuild their lives and future through sustainable housing and community economic development. Cash grants were also provided to homeowners earning daily wages to help them cope amid the COVID-19 pandemic. Separately, 37 families who lived in temporary shelters in a flood-prone community in Kalutara partnered with Habitat to construct their own homes.

For my children's sake 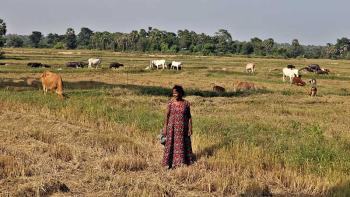 Look how far we have come

Through the EU-funded “Homes not Houses” project completed in June 2021, Sri Lankan families like Nalini’s are building better lives. 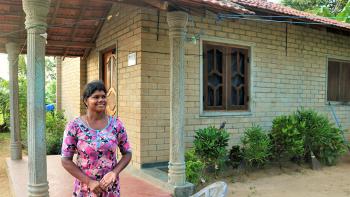