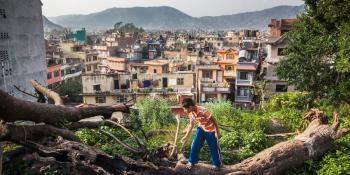 Can digital land records stop this?

Billions of people do not have a formalized right to the land on which they live. Like Mamolelekeng, they live in constant fear of eviction. Initially, she and her five grandchildren lived in a shack for free. But when their landlord sold the land, the new owner wanted to evict them.

Secure land and property ownership, and a well-functioning rental system could prevent forced or unexpected evictions. But despite the technological progress in recent years, less than a third of the world’s countries keep digital land records.

It may take a thousand years

Recent estimates suggest that it may take over a thousand years to legally register all land in some developing countries. According to the World Bank data, on the African continent, only Rwanda and South Africa maintain digital land records.

However, the target of registering all land could be achieved faster than this with the arrival of new digital technologies. Today, high resolution satellite images can help identify the land occupier, or deficiencies in land administration. Services within the so-called Cloud Computing or open source software enable developing countries to overcome their own IT infrastructure obstacles. Mobile applications and blockchain technology are also coming to the fore, as the technology can address the challenges of corruption or insufficient administrative capacities.

In many rural areas of Tanzania, Mobile Application to Secure Tenure (MAST) is being launched with local government support. For the first time, such technology is widely used in Africa. The experience gained should also be useful for other countries that are planning to join the reform with the support of the World Bank (Ivory Coast, Ghana, Liberia and Mozambique).

Kenya has also been trying to digitalize its land information system in recent years. It has focused on increasing reliability and availability, as well as minimizing land disputes and increasing investment in the real estate sector. Among other things, Kenya wants to achieve these goals by detailed mapping using drones.

Rwanda is one of the most successful countries in this African region, as it has been using a fully digitized land registry since 2012. Today, the nationwide program (LAIS) records spatial and textual data for each of 11.6 million parcels. Like Honduras and Georgia, Rwanda is also testing technologies based on blockchain. The system allows land information to be stored in unalterable digital registers and controlled by a network of computer users.

The Punjab Province in Pakistan launched its own “digital revolution” of land rights in 2012. The local government replaced the defective and easily influenced prior system with the Land Records Management Information System (LRMIS). Professional staff in nearly 150 modern cadastral centers now operate in approximately 40 provincial districts and have more than 55 million registered landowners in their records. The registration time has decreased from about two months to less than an hour.

Technology makes it possible to secure land rights for the most diverse groups of population under cost-effective conditions, which was unimaginable a decade ago. The number of campaigns to ensure land rights is growing worldwide, and many also bring significant positive results. According to the UN, secure tenure and good land management reduce the number of conflicts and social tensions.

The Sustainable Development Goals, which the UN set in 2015 and which they want to achieve by 2030, are increasingly demanding the data that these technologies provide. It is expected that countries will regularly report, for example, on the number of men and women whose land ownership is legally, formally and safely documented. The data will open new possibilities to better plan our cities and monitor environmental issues.

We need to change attitudes towards land and property

Securing equal access to land for all could still remain a challenge, even if all countries had well-functioning land registration systems. In many countries women still cannot own or inherit land or property. Land and housing are often perceived as commodities, rather than places to live and rising prices are becoming unaffordable for many low-income individuals. Traditions will need to be broken. Attitudes towards land and property will need to be changed.