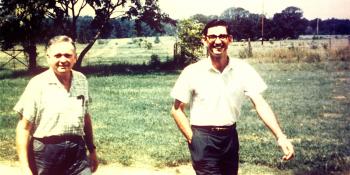 Milestones by the decades:

The Jordan and England families found Koinonia Farm, an interracial community outside Americus, Georgia, where all people are treated equally, resources are shared, and great responsibility is placed on being wise stewards of land and natural resources.

The Jordan family and other Koinonia residents are excommunicated from Rehoboth Southern Baptist Church for their views on racial equality.

Boycott of Koinonia products by the local business community begins and continues into the mid-1960s.

Searching for new purpose in their lives, Millard and Linda Fuller arrive at Koinonia.

The concept of partnership housing and the Fund for Humanity are created. Partnership housing centered on those in need of adequate shelter working side by side with volunteers to build decent, affordable homes. The houses would be built at no profit. New homeowners’ house payments would be combined with no-interest loans provided by supporters and money earned by fundraising to create the Fund, which would then be used to build more homes.

The first partnership house is completed in Sumter County, Georgia.

Millard and Linda Fuller move from Koinonia, taking the principles of partnership housing and the Fund for Humanity to Africa.

The Fullers return from Africa, and Habitat for Humanity is formed with headquarters in Americus, Georgia.

The first partnership houses are completed in Zaire.

Clive Rainey joins Habitat for Humanity as its first volunteer.

Habitat for Humanity International is formally incorporated under the laws of the state of Georgia.

The first Habitat ReStore in the U.S. opens in Austin, Texas.

Habitat celebrates 25th anniversary with a build in Indianapolis, Indiana.

Millard and Linda Fuller travel to Uganda and several other African nations to celebrate the 20,000th house built on the continent of Africa.

A team of volunteers in Shelby County, Alabama, break the record for the fastest Habitat house build, completed in just 3.5 hours.

Habitat opens the Global Village & Discovery Center in Americus, Georgia, which demonstrates shelter needs around the world and highlights examples of the safe and decent homes that families build when they partner with Habitat.

Habitat’s 150,000th house is completed during a build in Romania.

Habitat for Humanity International’s board of directors names Jonathan T.M. Reckford to serve as the organization’s chief executive officer.

In Knoxville, Tennessee, Habitat celebrates the construction of the 200,000th house, having helped 1 million people create safe and decent places to live since 1976.

Habitat launches Operation Home Delivery to help rebuild the U.S. Gulf Coast in the aftermath of hurricanes Katrina and Rita.

Habitat announces that in the two years since the deadly Indian Ocean tsunami, the organization has helped nearly 10,000 families build permanent housing in India, Indonesia, Sri Lanka and Thailand.

In what will become an annual tradition, the Rockefeller Center Christmas tree is milled into lumber and donated to Habitat to be used in the construction of an affordable home.

Habitat is ranked as the largest private homebuilder in the U.S., according to Builder Magazine’s 2008 Builder 100 list.

President Barack Obama and first lady Michelle Obama volunteer with Habitat in Washington, D.C., as part of 9/11 National Day of Service and Remembrance.

Habitat announces that the organization has served more than 2 million people worldwide.

Habitat is recognized as one of the most innovative international development organizations with selection as a Devex Top 40 Development Innovator.

Habitat establishes the MicroBuild Fund, the first impact capital fund to invest in the innovation and scale of incremental construction and home improvement finance for low-income households in developing countries.

Habitat launches first fleet of mobile response unites to assist those along the U.S. East Coast affected by Hurricane Sandy.

Habitat celebrates 800,000th house build, rehabilitated or repaired. The milestone is announced as Habitat reveals that — for the first time in the organization’s history — more than 100,000 families had been served in a single fiscal year.

Habitat embarks on new strategic plan aimed at expanding the organization’s impact on all aspects of affordable housing in the more than 70 countries where Habitat is at work. The plan’s three main components:
•    Improve housing conditions for an ever-larger number of the world’s poor and low-income families
•    Support and influence partner organizations to increase access to shelter and advocate for affordable housing policies
•    Mobilize hands, hearts and voices of volunteers in the cause of adequate and affordable housing.

Habitat launches the Terwilliger Center for Innovation in Shelter to expand market-based solutions for affordable housing.

Habitat announces that more than 13.2 million people have built or improved a stronger, more stable place to live with the organization’s help.

Habitat launches ShelterTech out of the Terwilliger Center to scale affordable housing solutions and build an ecosystem of startups, corporations, foundations and investors eager to radically improve the lives of low-income families.

Habitat reports that more than 35 million people have partnered with us to access new or improved housing since its founding in 1976.

Habitat celebrates 1 million people who have improved their access to better housing through the MicroBuild Fund, more than doubling the initial projected impact.

Habitat launches the Advancing Black Homeownership initiative to redouble its commitment to increasing homeownership opportunities for Black families in the U.S.

Learn more about Habitat’s work in your community and around the world in our stories section.